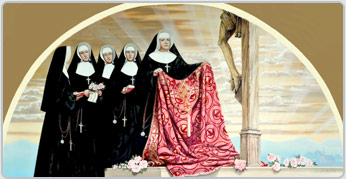 Today we remember an indefatigable worker in the Lord’s vineyard, a Canadian foundress of a religious order, Bl. Marie-Léonie Paradis.

Born Alodie-Virginie Paradis in L’Acadie, Quebec on May 12, 1840, she came from a distinguished Catholic family, descended from a clan that had given the Church several bishops, including an archbishop of Quebec.

“Élodie,” as her family called her, was homeschooled until age nine, which is when her parents sent her to the boarding school run by the Notre-Dame Sisters. Although the Sisters were quite kind to her, she was often miserably homesick. It was here that she received her First Holy Communion and Confirmation in 1849 and 1850, respectively.

In these tender years, seeing the inspirational example of devotion given by the priests who served her community made her want to imitate their witness of loving the humble and the poor. This desire animated her entire life from there on.

Her father worked very, very hard to keep his mill running, but no matter how he tried, the mill never really succeeded. It was around this time that the California Gold Rush was happening, so he went to find his fortune. During this time, Élodie started thinking she heard God calling her, gently tugging her toward the religious life. So she consulted Fr. Camille Lefebvre, CSC, who encouraged her to enter the Congregation of the Marianites of the Holy Cross, an order recently founded at Saint-Laurent, Montreal, to serve as domestic help in the houses of Congregation of Priests of the Holy Cross and to educate youth.

She took his advice, entering as a postulant on February 21, 1854 at age 13. Her father didn’t learn of her entrance until his return from California, and he was a little shocked, to say the least. He went to the convent to plead that she return home with him.

She decided to follow God the Father, instead, and her dad accepted this. Thus two days shy of a year after entering, Élodie became a novice, taking the name of Sr. Marie de Sainte-Léonie. Despite poor health, she made her final profession on August 22, 1857, at age 17.

Since she had gained a reputation as a fine teacher and a joyful example to little ones, she was sent to various homes to serve as tutor to the children therein.

In 1862, her superiors sent her to New York, where she served as governess at St. Vincent de Paul Orphanage, where she stayed for the next eight years.

It was during this period that the Sisters in America separated from those in Canada. Believing it to be God’s will, Sr. Marie-Léonie chose to stay America and followed them to Notre Dame, Indiana, where she “taught needlework and French at St. Mary Academy.” Although it took her away from what she wanted to do, which was serving priests, “her twelve year stay in the United States permitted her to command the English language.”

In 1874, Fr. Lefebvre invited her to return to Canada to help form the young as well as the religious at the College of St. Joseph, which he had founded in Memramcook, New Brunswick, to help educate the French Acadians as well as Irish Catholic immigrants.

Her joyful, bustling, energetic example attracted many young women who wanted to follow this short little lady in a life lived generously for Jesus Christ. 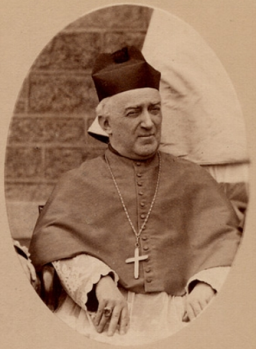 Learning of this remarkable woman, Bishop Édouard-Charles Fabre of Montreal invited Sister in 1877 to found a small community of religious to serve colleges in the diocese. Fr. Lefebvre assisted her in this work, and so the congregation was established August 26, 1877, although the formal date for the foundation of the Little Sisters of the Holy Family is May 31, 1880.

Its specific purpose was to do domestic work in religious communities, colleges, and seminaries.

For some reason there evidently was a falling out with Archbishop Fabre, who removed his approval for the Sisters carrying out their apostolate in his See, even though they had done great work.

So in 1895, a year before his death, Bishop Paul La Rocque of Sherbrooke, Quebec, invited them into his diocese, which is located just above the border with Vermont. 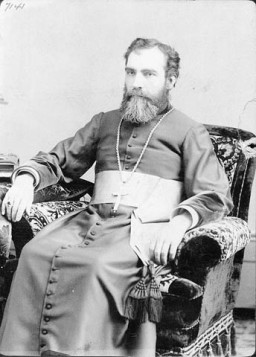 His Excellency said of the Blessed, “She always had her arms open, her heart in hand and a smile on her lips, welcoming everyone as though they were God himself. She was all heart.”

Here vocations flourished and Mother Marie-Léonie was able to open other houses.

In all things, Mother encouraged her Sisters to recall the purpose of their founding, which was to serve the person of Jesus Christ in His priests. If they saw Him, their Spouse, through His clergy, they would live an apostolate that was sublime.

Although Mother had no formal theological training, she grew in her knowledge of God and our holy religion by her daily adoration of the Eucharist, the Sacraments, and her assiduous reading of the Gospels. As a result of these practices, she radiated out the person of Christ, and attracted many women to the religious life, whom she herself formed and educated.

By the time of the foundation’s twenty-fifth anniversary, the Institute was enough of a success that the Sisters had to move into larger quarters, which they did in 1907. But although she did her best to hide it, Mother was now ill with cancer. In the spring of 1912, her health turned an irrevocable turn for the worse, and she died May 3, 1912, aged 71. It is said she worked “until the last few hours of her life.”

Indeed she loved working. It gave her great pleasure. She would tell her Sisters, “Let us work, my daughters, we shall rest in heaven!” 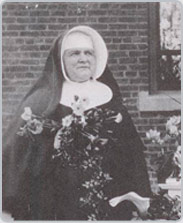 “On the morning of her death, she had the joy of receiving permission to print the book of [her order’s] Rules she had patiently awaited for the last 20 years. She died suddenly after supper; in the afternoon she had told one of the sick sisters, ‘Goodbye, see you in heaven!’”

The Little Sisters are now in 67 houses spread throughout Canada, Honduras, Italy, and the United States, and they are still dedicated to serving priests in their ministry by serving them in their rectories, colleges, and seminaries.

Pope St. John Paul II raised Mother Marie-Léonie to the altars in a beatification ceremony celebrated in Montreal on September 11, 1984, during his apostolic journey to Canada.

Mother Marie-Léonie’s faith made her see and serve Christ in the person of the priest and in all those she met. Her esteem for the priesthood was equal to her devotion to the Eucharist. She went to God very simply, putting her trust in Him as a child would to a good Father.

The Virgin Mary had a special place in her affection: “My confidence in our good Mother is unlimited. She knows our needs and has such great power over the heart of her divine Son.” She had a remarkable devotion to Our Lady of Sorrows and to Our Lady of the Rosary.

She also had a loving devotion to St. Joseph and St. Anne.

Church authorities are currently investigating an alleged miracle that, if approved, will lead to her canonization.

Bl. Marie-Léonie, pray for us!

2 thoughts on ““Let us work, my daughters, we shall rest in heaven!””