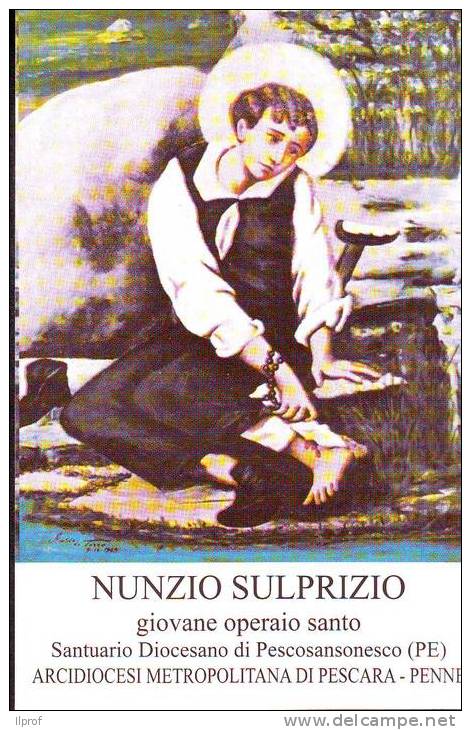 There almost was never a time when Bl. Nunzio Sulprizio’s life was not difficult.

The blessed was born just after Easter on April 13, 1817, during a time of great famine in Pescosansonesco, a village in the province of Pescara, Italy, and he was named after his paternal grandfather.

When the child was just three, his beloved father died. His younger baby sister died roughly four months later. Two years later, his mother Rosa remarried a much older man out of financial necessity (she had no other support), and like many – not all – stepparents, the man had no use for the boy, seeing him as merely the child of his spouse. Along with regular food, he regularly fed little Nunzio “with harshness and contempt.”

It was this time that he began to attend a small school run by the priest Fr. De Fabiis. In addition to their letters, Father taught his pupils to know and love Jesus and desire to serve him.

Because of stepfather’s treatment, Nunzio bonded with his mother and maternal grandmother Rosaria Luciani del Rossi, an illiterate woman of great faith and goodness. Thus when his mother died on March 5, 1823, he went to live with Rosaria. They were very happy together, and would walk and pray, attend Mass, and do housework. He continued to attend school in his new home, this one run by a Fr. Fantacci, who used to take the children to adoration of the Blessed Sacrament, which Nunzio loved.

Sadly Rosaria died on April 4, 1826. Now his uncle Domenico Luciani, a blacksmith, took him into his home but out of school and made him his apprentice.

Like his stepfather, Nunzio’s uncle was not kind to him. He worked him very hard, and when he perceived the boy needed correction or discipline, his punishment was to not feed the boy. If he needed an errand run or materials transported or fetched, he sent his nephew, not matter how far the distance or how heavy the burden. If he didn’t do the errand to his liking, Domenico would beat and curse him. For anyone but especially a child, this was a great burden.

Instead of despairing, however, the boy would think of Jesus as he beat on the anvil and think of how Our Lord had been beaten for mankind’s sins. As he suffered the “scourge” of inhumane work and treatment, he thought of Christ’s suffering the scourging at the pillar during His sacred Passion. When he suffered, he offered these pains up to the One Who had mastered suffering “in reparation for the sins of the world” and so that he might more perfectly “do the will of God” and to be found worthy of entering into the Son’s rest.

Because of a wound incurred during one errand on a winter morning, Nunzio’s foot became infected. He became so ill, he couldn’t rise from bed. His uncle demanded that he get to work because “if you do not work, you do not eat.”

The lack of proper care led to his contracting gangrene. Still his uncle told him, “If you can not lift the hammer, then you pull the bellows.” The boy was in so much pain by this point that every movement was torture. His sore oozed puss and required constant cleaning. Once he went to a nearby stream to clean his wound, but a woman coming to wash her laundry chased him away saying he would pollute the water. Finally he found his own stream and would pray many Rosaries while letting the water cleanse his sores.

Finally he had to be sent to a hospital, first at L’Aquila and then Naples. All along he offered up his sufferings in union with the cross. He also helped care for other patients who were worse off than he.

It was during his hospitalization in L’Aquila that his father’s brother Francesco Sulprizio, a soldier, heard of his plight and brought him to Naples in 1832. Shortly thereafter he acquainted his nephew with another soldier, Colonel Felice Wochinger. Col. Wochinger, known as “father of the poor” for both his faith and charity, took the youth under his wing and essentially became a second father to him.

It was at this time that a priest came to visit. A good priest asks: “Do you suffer much?”. He responded, “Yes, I do the will of God.”

“I wish to confess and receive Jesus in the Eucharist for the first time!”

“You have not made their First Communion?”

“Who cares for you?”

“The providence of God.”

So began Nunzio’s preparation for confession and First Holy Communion. His confessor later related that “from that day the grace of God began to work in him in way that was outside of the ordinary, so that you could see him run from virtue to virtue. His whole person breathed love of … Jesus Christ.”

It was around this time that he also met St. Gaetano Errico, the Neapolitan priest who founded the Missionaries of the Sacred Hearts of Jesus and Mary. The holy cleric promised the teenager he could join the order when the time came.

His desire to enter the religious life stemmed out of the fact that from the time he was little, he had attended Mass of his own volition. Not only did he know the person of Jesus Christ, but he worked to mirror him to others in everything he did.

He spent two years at the hospital in Naples and at a spa in Ischia. He would read, pray in the chapel, and teach the child patients their catechism. He would tell the sick, “Always be with the Lord, because from Him comes all that is good. Suffer for the love of God and with joy.”

At first Nunzio’s situation seemed to improve, but then he contracted bone cancer. Doctors believed their only recourse was to amputate his leg. This did nothing. Indeed his situation and suffering worsened, and his pain was acute. He hoped that God might heal him, but he never lost his faith that the Lord was guiding him every step of the way.

He would tell visitors, “Jesus endured so much for us and for his merits awaits us eternal life. If we suffer for a while, we will enjoy in Paradise,” and, “Jesus suffered a lot for me. [So what if] I cannot stand for Him?” or, “I would die to convert even one sinner.”

One of the last things he told the colonel was, “Be cheerful. From heaven I will always be helping you.”

In early May 1836, the youth asked to make his last confession and to receive extreme unction and viaticum. He died May 5.

Following his death, his body was exhibited for five days because of all the Neapolitans who had heard about him and wanted to see “lu santariello” (“our little saint” in the local dialect), and there remained during this entire period the strong smell of roses.

Nunzio became one of the first people beatified by Bl. Pope Paul VI when he was raised to the altars on December 1, 1963, before all the world’s bishops at a session of the Second Vatican Council.

A Blessed Nunzio Sulprizio Shrine exists in Pittsburgh at St. Cyril of Alexandria Church in the Brighton Heights section. It was originally established in the home of the late Delfina Del Russo Cesarespada, who believed Bl. Nunzio saved her from death, but it was moved here in 2006 following first her death and then her husband Francesco’s.

As one source put it, his life shows we “must believe and obey the Crucified and Risen Christ, Who makes all things new.”

A potential miracle needed for his canonization is currently under investigation at the Congregation for the Causes of the Saints.